By Rob PorterJuly 27, 2016Be intentional

Gather ’round as I regale you with stories of paving roads…

As I sat one day watching HGTV (before you jump to any conclusions, I had just returned home from punching nerds and eating meat and stuff) and effectively ignoring my children, I began to realize that their childhood, and my place in it, would be over as quickly as Property Virgins (it’s what dudes do). It occurred to me we were mere moments away from Kool-Aid Man bursting through the wall encouraging us to pursue a healthy lifestyle by hydrating ourselves with a pound of sugar (if you make it right). 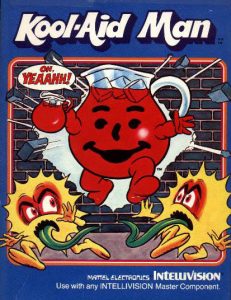 Drink Kool-Aid. It’ll help chase away the sun in your life

Sufficiently motivated, I spontaneously declared we were going out back to the woods. I call it the woods; it’s just a 1/2 acre cluster of trees with a creek running (sitting stagnantly breeding malaria) through it. Still, this was going to be my moment to shine as a father. I would DVR Fixer Upper and expose my children to nature (it’s what Chip and Jo-Jo would do). We would meander through the trees and listen to the birds. We would stop occasionally to catalog a rare insect. We would learn life lessons about trees and stuff. We would pause momentarily as the sun glimmered in our eyes to say, “I love you,” and embrace warmly.

“I love you dad. This moment is the greatest of my life. You are the best dad ever. Also, that flannel jacket with hoodie liner was a really good idea. It doesn’t make this moment seem creepy or ominous at all.”

Our first exposure to the wild began as we left the sidewalk. My son walked three steps and froze. Fear ran across his face as he started to panic. Attempting to stay calm, I gently inquired “What?! What happened? Is it a snake?! DID YOU SEE A SNAKE?! SWEET FANCY MOSES, WERE YOU BITTEN BY A SNAKE?!!!”

This was all my fault–guilt flooded my heart as I realized his tiny legs were exposed to PURE nature. In my haste to be a little more Chip Gaines, I had failed to appropriately dress my children for this cruel mistress. Where were the crampons? The rope? The dead animal skins?

“Babe, I just think it would look a little more believable if we draped a dead deer on my shoulders. I don’t want to look like an idiot.”

Attempting to compose myself for whatever horrific scene might lay before me as I approached my young Padawan (remember, Padawan is a title and should be capitalized). To my great relief, there was no deadly grass viper attached to my sons bare leg. There was, however, some tall grass. Still unsure of potential threats, I asked my son what was the matter. “The grass is touching my leg.”

Grass me no likey.

Of course! How could I have been so short-sighted. In my zeal to have the best groomed lawn on the block, I had never built my children’s immunity to tall grass. Unfortunately, already a block into our journey, there was no choice but to soldier on. “Nothing to worry about big guy. It’s just grass. It can’t hurt you.”

“Dude, seriously, no big deal. Just hold my hand and you’ll get used to it.” (I find parenting is best when you completely ignore your child’s feelings and focus on trying to not be annoyed that they are ruining your amazing parenting).

“Can you just carry me?”

“Fine.” I was at a crossroads–connect emotionally with and validate my son or teach him the harsh reality that feelings aren’t as real as knowing how to walk through tall grass to silently kill a bear to keep yourself alive. I opted for emotional connection. I carried him a few feet (research supports the idea that emotional validation occurs in 2.7 feet) and then frustratedly told him we would just have to hold hands and walk close to the fence where the grass was shorter. My irritation was growing, but nothing would interfere with our closeness. We were struggling, but my constant jerking of his arm meant we were struggling together. I could feel us growing closer with each angrily forced step we took. We spent the next 5 minutes walking (constantly stopping to frantically point out tall grass patches) in father-son camaraderie. The intense burning warmth was overwhelming!  And the payoff was breathtaking!

We had arrived at the pinnacle of family connectedness. Here, we could truly commune with nature and our mounting feelings of disappointment and pure hatred for lazy lawn-care. This was what books were written about. We catalogued mosquitos as we scientifically swatted them from our necks. We learned new words like atrocious, stench, and Zika. Between angry attempts to stop my children from fighting, I seized teaching moments to point out that the green stuff they were launching at each other was called ‘algae.’ It was the most connected, educational, and edifying 5 minutes I have ever spent with my children. I gazed into their eyes and basked in the glory of my impeccable parenting.

“Here’s the plan. I’ll carefully arrange his hair for the messy look, trying not to pull it. I’ll gently rub some dirt at various points on his face, being careful not to get any in his eyes. Then I’ll tell him no one loves him. That’s when you snap the shot.” (Credit–cause it’s a good photo)

Mission accomplished. I could already see this cherished moment reflecting in their tear-stained eyes. Character building complete; Childhood saved. Right? Somehow, this felt like failure. my intention to create a moment with my kids had turned into a poopstorm of anger and disappointment. Fearing I could no longer contain my overwhelming vexation, we headed home. I decided to blaze a more direct, grass-free trail home. A straight shot where my kids could leap over dead trees and I could teach them about erosion. I would be softer this time and reclaim the moment, arriving home to the inevitable praise of my wife and children at how successfully I had shaped their childhood. We set off.

“What are you afraid of? A fate worse than death? …No, just death. Isn’t that enough?”

Unfortunately, we soon discovered a fate worse than death. The path I had chosen was plagued with shin-high thorned-vines. No big deal, I again reassured my son softly. With all this newly built character, we would brave it together.

Huh. Weird. He hesitated. Fearing the thorns would scratch his legs (where’s the logic in that?), he demanded that I carry him home. I reluctantly, yet lovingly seized him and proceeded to bloody my legs (picture not included, as my wife would be grossed out) in blind rage as I maturely stomped toward home.

The Devil’s in the details…and also maybe in the woods behind my house.

Emerging from the woods, I pondered the possibility that this time with my children was slightly less than emulatable (trust me, it’s a word). In fact, recounting our journey to my wife might have led her to the conclusion that I was less than understanding and empathic (I did not hesitate to remind her that I have a Ph.D. in understanding and empathy). It seemed that my intention of creating a truly shutterstock-worthy moment in nature with my children may have inadvertently created anti-social/homicidal tendencies instead.

For days (that may be a little dramatic) I was inconsolable and concluded it was best to let me parenting take a back seat to Minecraft and StampyLongHead. I would spend my time entering the HGTV Dreamhome Giveaway and start a youtube channel on which I would film myself watching HGTV (patent pending…I thought of it first). I had failed.

Interestingly, my kids have a very different memory of this debacle (I know. You totes didn’t see that coming). The following week as we were driving home, my kids excitedly pointed the woods out to my wife. They taught her about algae. They told her how they had walked in the ‘river.’ …”Dad, you’re the best. Can you put on some hiking boots and an old denim shirt and take us out to the woods to teach us why the sun bleaches the logo off of old beer cans?”

Far too frequently, we pessimistically (I know pessimists will read that word as “realistically”) assume we know the outcome of our attempts to change. This is especially true in relationships. After years of being with your kids or your partner or spouse, you can anticipate that if you do this, they will do that. There is no hope of change, I will do it wrong, it will be misunderstood, there’s no point. So, we stop making attempts to change. We wait for others to change. We stop all focus on our own good intentions and stop paving any road at all.

Somehow, my kids enjoyed our anger-riddled trek to the woods enough for us to go many more times. My intention was to create a magical moment they would remember forever, but instead handled myself poorly as a father.  But, those intentions and the attempt that followed led to a change in the dynamic of our relationship. All because we made an attempt to do something different. Change never occurs without an attempt. Attempts never occur without good intentions. If you have 50 good intentions and 1 good action, change can occur. Things will get better. Go grab some good intentions and pave a road.

Now if you’ll excuse me, I need to put on a flannel and go do something emulatable.

Wait. What does that even meaning?

Wait. What does that even meaning?